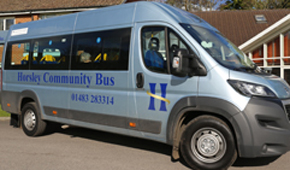 The story of East Horsley dates back to the time of the Vikings when a Danish king was on the throne and to recount it in detail would take a book of at least 100 pages. Fortunately, such a book does exist; if you are interested in delving deeper 'East Horsley - The History of a Surrey Village' by local historian Pam Bowley, is available from our local post offices in Station Parade and Bishopsmead Parade. Here we offer an abridged version and to this end we are going to concentrate on the two men who, more than any other, have shaped the village that we live in today, William King, the 1st Earl of Lovelace and Frank Chown, a builder and surveyor who mapped out and built much of modern East Horsley.

William King was born in 1805 and was the eldest son of the 7th Baron King residing at Ockham Park.  William was educated at Eton and Trinity College, Cambridge and initially worked for the diplomatic service but, when his father died in 1833, he became the 8th Baron King at the relatively young age of 27. Two years later he married Ada Byron, the only legitimate child of the famous poet Lord Byron.  Not only was Ada very attractive having inherited her father's handsome dark looks, but she was also very clever with a passion for mathematics and music.  But it wasn't only good looks and intellect that attracted William to Ada. She was an heiress with a large dowry and the promise of inheriting large and valuable estates in the Midlands. The couple had three children, Byron, Anne Isabella and Ralph who eventually was to become the 2nd Earl.

In 1837 Victoria became Queen and shortly after William was created the 1st Earl of Lovelace, a title which came from his wife's family. In 1840 Lord Lovelace was appointed Lord Lieutenant of Surrey and purchased the Horsley Estate comprising 2,000 acres and the house designed in 1820 by Sir Charles Barrie for the then owner William Currie. The Earl, an amateur architect and engineer, decided to extend the house to make it worthy of a man of his status.  First to be completed were the stuccoed tower at the west end and the great hall.  Meanwhile Ada was absorbed with the study of mathematics and entered into a lengthy correspondence with Charles Babbage, the inventor of the 'Analytical Engine' the forerunner of the modern computer.  However her health was failing and in 1852, aged just 37, she died of cancer. In 1865 Lovelace remarried Jane Jenkins and together they had a son Lionel who was eventually to become the 3rd Lord Lovelace.

On Ada's death, William inherited considerable wealth and set about further developing the Horsley Towers and the surrounding village. At this time the village was a small community of houses, farms and shops clustered around St Martin's Church. The arrival of the railway was still several decades away and the land to the north of Bishop's Mead was mostly farmland. In 1858 the Earl completed the magnificent 'Italian' tower at the east end of the house. Constructed of flint and locally produced brick, the tower set the style for a number of further additions including a chapel and cloisters all lavishly adorned with brick and flint. He constructed a brick and flint wall around the entire estate, built an imposing twin tower entrance on the Guildford Road and set about transforming the village in a similar style. Prior to this the majority of buildings in East Horsley would have been the traditional construction consisting of a timber frame with wattle infill and a thatched roof. Between 1851 and 1874 virtually every building in the vicinity of Horsley Towers was remodelled in the Lovelace style of flint and bricks. The Duke of Wellington pub was an early project. Another was the purpose built shop for Conisbee the butcher on the corner of Ockham Road South and Lynx Hill.

When Lovelace died in 1893 his son Ralph acquired the title and in turn was followed in1906 by Lionel who became the 3rd Lord Lovelace and inherited Horsley Towers. At the end of the First World War high taxes forced him to sell the estate - the new owner was Tommy Sopwith, an early pioneer of aviation who had amassed a small fortune from manufacturing fighter aircraft at his factory in Kingston. However, once the war was over demand for his aircraft quickly dried up and to complicate matters still further the government came after him for the return of excess profits. Having spent £150,000 in buying the estate and a similar sum to modernise it he too was forced to offer it for sale. Auction bids failed to meet the reserve price so he resorted to selling off parcels of land which leads us to the second of the two men who, between them, did much to shape the village of East Horsley as we know it today.

Frank Herbert Chown was a builder and surveyor based in nearby Ashtead. When Sopwith offered parcels of land for sale, Chown purchased land close by the rail station. It was a fortuitous decision as, in 1925, the line was electrified offering quick, clean and reliable services to London. His first few houses were snapped up by London commuters keen to enjoy the pleasures of the countryside and when more land was offered for sale in 1926, Chown was a keen buyer. He set up an Estate Office in a small wooden building at the junction of Cobham Way and Ockham Road and started planning roads like Woodland Drive, Pennymead Drive, Lynx Hill, Greendene and The Warren. He specialised in designing Tudor style cottages with oak frames and thatched roofs. As Pam Bowley points out in her history of the village, it was somewhat ironic that the Earl of Lovelace had spent much of his life getting rid of traditional thatched cottages whereas Frank Chown spent much of his life recreating them.

The mini construction boom in the 1920s and 30s gradually moved the focus of the village northwards to where today's busy shopping parade is now situated. The Station Hotel was originally built to provide accommodation to surveyors and engineers building the railway - it is now the Meridiana Restaurant. Frank also constructed a parade of shops at Bishopsmead and operated his business from one of the properties. His eldest son Donald helped with running the estate whilst his second son Kenneth ran a general store in the Parade. Donald and Kenneth were amongst the group of drama enthusiasts who founded the Nomads in 1934 and which is still going strong today in its purpose built theatre behind Bishopsmead Parade. Frank's first wife Nell died of cancer in 1929 and in 1932 he remarried Eileen with whom he had two daughters Jill and Sheelagh. Frank himself died of a heart attack in 1942 and, although his son Donald continued running the business after the war, it gradually wound down and ceased altogether in the 1960s.

Today both Lovelace and Chown houses are much sought after and many are locally listed locally by Guildford Borough Council. Horsley Towers still looks as magnificent as it must have done in its Victorian heyday and Thatchers Hotel retains much of Frank Chown's original building, constructed as Thatchers Tea House in 1934.

East Horsley is a thriving village popular with commuters who still travel up to town on the (usually) reliable train service but at the weekends enjoy the pleasures of the countryside. Not so much the fishing, hunting and shooting, that first attracted commuters in the 1920s, but gentler sports like cricket, tennis, cycling and golf. A good range of local shops and restaurants, quiet roads, easy access to the countryside, as well as local town centres in Guildford and Kingston make East Horsley a thoroughly delightful place to live and raise a family. If they were still alive today there's no doubt that Lord Lovelace and Frank Chown would gain considerable satisfaction from today's flourishing community.